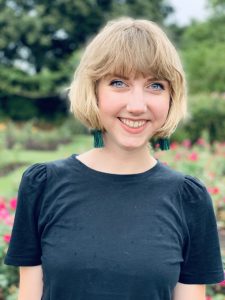 Berit Johnson is a Minneapolis-based singer/actor, teaching artist, and voice coach. She recently completed her Master of Music in Vocal Performance at the University of Illinois at Urbana Champaign after receiving a Bachelor of Music in Vocal Performance with a minor in Theatre Art at Concordia College Moorhead. Her teaching experience includes six summers instructing music to children aged 5-13 at Minneapolis Good Shepherd’s Summer Musical Theatre Camp, music directing two fully staged musicals, leading multiple improv workshops, teaching contemporary and classical voice in her private voice studio, and instructing a Singing in Musical Theatre course at the U of I as part of her two-year teaching assistantship. As a crossover performer in musical theatre and opera, some of her favorite roles include Fox in The Adventures of Sharp Ears, Woman 2 in Songs for a New World, Celia in Iolanthe, and Janet in The Rocky Horror Picture Show.
beritjohnson.info